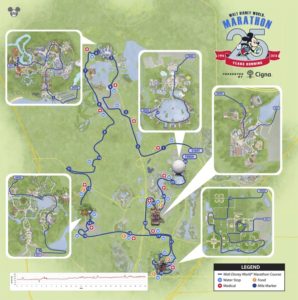 Disney’s WDW 2018 Marathon Weekend was January 4 – 7, 2018. My friends and I went down to run the 25th anniversary of the marathon: 26.2 miles around all four WDW parks. You started outside of Epcot and ran to the Magic Kingdom, to Animal Kingdom, to ESPN Sports (the hardest part!), briefly through Hollywood Studios, then your final mile was around the world in Epcot.

Crossing the finish line was hands down one of my biggest accomplishments. If you know me, you know how unbelievable it is that I ran a marathon. In college, I never ran more than 3 miles, and I only did that once because I thought it was a 2 mile turkey trot. I usually ran two. Even though I enjoyed running 2 miles, I couldn’t understand why you would run more. I didn’t know what to think about for that long (I now listen to books or podcasts) nor was I physically fit enough complete the challenge – let alone the challenge there is to commit to training. Long-distance runners were crazy to me.

A few years after college, a few of my friends started running halfs, then my friend Dan ran a marathon. He is still crazy to all of us, but it is because him and my other friends’ accomplishments and their simple encouragement that I tried my first half marathon in 2015. Because of peer pressure, I agreed to do this marathon in August 2017. 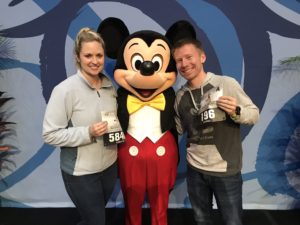 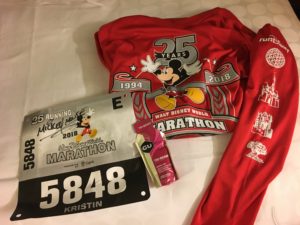 Nervous couldn’t begin how to describe my feelings on January 6, the day before the race. I couldn’t believe what I had gotten myself into. My training didn’t go as expected; the longest run I did was 18 miles. My training plan was to 22, but cold weather got in the way (I’m a complete wuss). We had a fun day around Magic Kingdom, but then it was time to have a good dinner (spaghetti) and go to bed early. A 2:30 am wake up call isn’t natural for anyone! 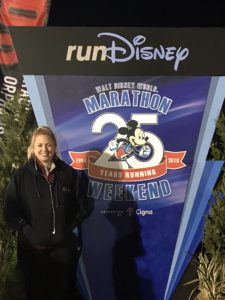 We bundled up since Orlando decided the best way to run this race would be in below freezing temperatures. You need to layer with lots of old clothes so you can throw them off. Disney will donate these clothes to people who are less fortunate. We checked in our bags with everything we needed after the race: flip flops, a shirt (my new long-sleeve race shirt!), sunglasses, my portable power pack, and chapstick. Dan, the expect, gave these suggestions, and they were invaluable.

I then made my way to my corral. (If you have raced in a half marathon before, you have to submit your time to place you in a corral.) There I waited; I waited for all of the faster groups to start their race. As if I wasn’t already nervous, the wait continued to add to it, but it also added a LOT of excitement! They played Disney songs from each year of the 25 years. I got to listen to most of the 90s which were the movies from my childhood. Then finally, the fireworks went off for my group…

It was dark and crazy early, but over 12,000 people were there for the race. Then there were family and friends cheering us on. I was on a cloud. I couldn’t believe I had just started out on my first marathon, and 26.2 miles later, I would be back there. The first 9 miles were some of the best miles I have ever run. I’m not a good runner, but I do it, and I’m completely okay with that. My first 9 miles were very decent. I tried to stop at a character, but the line was too long and didn’t want to destroy my good time or risk getting picked up by the balloon ladies if I was too slow. I made the decision to keep going.

Running in the Magic Kingdom was awesome! There were so many people and you could look at all of the rides. You run through Tomorrowland (there are real bathrooms there) then Fantasy and Frontier lands. You then get to go through the castle and out of the park. It was simply fantastic. This is one of the reasons I’m going to do the half in 2019 – MK and Epcot were the best parts of the race. You leave out the side on a road towards the Grand Floridian. It was between here and Animal Kingdom that it hit me – I still had 16 miles left!

With 2/3 of the race looming in front of me, I knew I needed to conserve my energy. When I train, I run/walk and my goal is always to run at the end. Therefore, I tried implemented my run/walk pattern of run 3 minutes, walk 2 minutes. Unfortunately, I couldn’t stay on it. It got too exciting, I wanted to run through Animal Kingdom, a water station was coming up, etc. I couldn’t stay on pattern, so I just ran and walked as I could. I did that until the long stretch of highway before ESPN Sports. My friend warned me that this would mentally be the hardest part of the race. Boy, was he right.

Thank goodness he gave me that warning. He even suggested during training that I visualize how it would feel at each part of the race. He told me to think about how I would feel physically, what I would see around me, and how to push myself to keep going. I found this exercise challenging, but I did try it once. When I got to this part of the race, the visualization did help. Once I got to this highway, the sun was out, and I was tired. I thought there was no way I could make it another 10 miles, so for my own survival, I decided it was time to walk. I was so impressed how people were still running at that point! They had trained and they were killing it. Luckily, Disney entertains you. We saw many characters, ran around the baseball stadium, and read jokes on signs.

Then it was off to Hollywood Studios. To get there, you run on the highway and up an exit ramp. Those are steep! I was still walking at this point, and running up would not be an option. They had a solider from Toy Story stationed on the ramp and that was one of the best characters. He was yelling at people to pick it up, not to slack off and keep running. He would run up with people as encouragement. After I passed him, I heard him say, “get down and give me 10!” After a brief pause, I heard a huge applause and cheers! A good sport got down and started doing push up. Everyone around was encouraging him. This is a great example of how encouraging this crowd is and why Disney is many people’s first marathon.

Hollywood Studios is neat but was very short. The park was open, so it is fun to have onlookers. I tried to run a little bit, but I was too tired. We got outside to the boardwalk where I knew there were only 3 miles to go. Just a 5K, but it was the longest 5K I have done. Then my Apple Watch ran out of battery.

You enter Epcot around Great Britain and mile 25. It was the last push; now was the time. I wanted to run the last mile. To my encouragement, they had Disney music playing over the park’s speakers. It was so motivational to me. I turned off my podcasts and took in the moment. I hadn’t stopped to visit a character all day because I was scared of getting too far behind, and I also was afraid that I would get my legs started again! As I ran through France, I saw Belle and Sleeping Beauty taking pictures with guests (not for the race). I carried my camera the whole race, and went to take a picture. Their handler asked if I wanted a picture. I hesitated knowing I didn’t want to wait. She noticed this and said I could cut in front of everyone! I got a picture with characters. That put me over the moon! 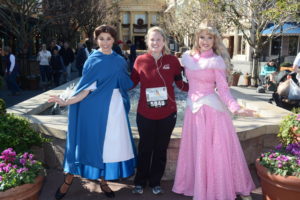 As I started running again, Hercules “I can go the distance” started playing. Can you think of a more perfect song to play at the end? I was pumped! Then, the camera in front of the Epcot ball was open, so I got my picture there, too. 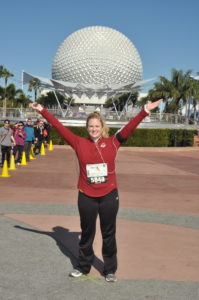 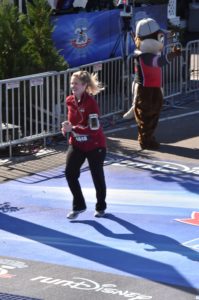 That was it, less than half a mile left. I had this! I ran out of the park and started to hear the gospel choir. My friend also told me they would be at the end, and it was so motivating. Then, I could see it. The finish line was right there! People were tired and slowing down, but I had to make it. Chip and Dale were there. I could do this! It wasn’t my fastest run, but I ran over the finish line. Tears welled up in my eyes. I had completed a full marathon. I had prayed to God and asked my late puppy Amie to watch over me. I knew that they had. Somehow, I pulled through and did it. 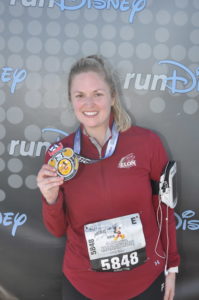 When you finish a race, they always have lots of water and sports drinks to help you recover. Disney also had photo booths so you could take pictures with your new medal.  They even gave us mouse ears as a present for the 25th anniversary! I got my bag and found my friend. Flip flops and a clean shirt were amazing! I can’t drink beer after a race, so I stuck with my water. There is no way for me to capture my pride and excitement having completed this race. Something I thought was impossible became possible. Like so many things in life, you just have to do it.

We met up with our other friends as everyone completed the race. Then it was time for a well-earned shower and nap. After we recovered slightly, we went walking around the world at Epcot. On marathon Sunday, everyone comes out to show off their medals. We wore our marathon medals proudly, but it’s a funny experience. I told people I “just” did the marathon as I admired their Dopey medals (earned by completing the 5K, 10K, half, and full). Then we had dinner and watched fireworks. 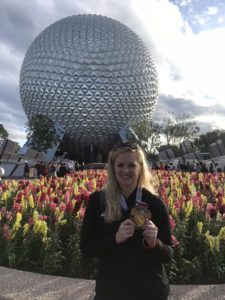 I’m not saying completing a marathon is for everyone, but if I did it, anyone can do it. Talking about wandering…