Green Chef is another meal subscription service, but with an organic twist. Like other services it provides 3 meals/week for 2 people. The price is a bit more expensive, but definitely some of the best meals I’ve made.  You can order based on your diet (vegetarian, omnivore, carnivore, Paleo, and gluten free). This diet will affect the price of the box. The vegetarian is the cheapest at $62/box and Paleo is most expensive at $90/box. First time buyers can get 2 free meals. 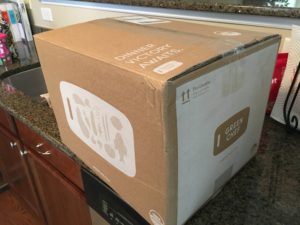 This has been my favorite packaging by far because it’s color-coded. Who can’t love that?! Blue Apron was a box of ingredients and you had to determine which one went with which recipe. Green Chef had all of the ingredients in one box, but they each had a color label on them (goldenrod, red, orange), which matched the recipe card it was for. Such a better way to organize it.

All of their packaging is also recyclable. You had to read on the website how to recycle each part, but it was good to see their recognized how wasteful this could be if you received a box every week. They also pre-made sauces and some ingredients, so they had numerous small, plastic jars. I saved some of these to use in my lunches later.

I ordered the omnivore box. You could choose from 6 meals (two or three veggie, chicken, beef, and pork, I think). Everything was high in calories (480-790 calories), which I think is because of the sauces and olive oil. My meals were:

All of these were very delicious and made for good leftovers. My biggest complaint is that I enjoyed 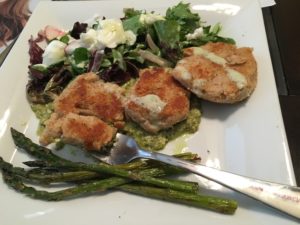 these recipes but couldn’t make them again because the sauces were already made. For example, the White Bean Cakes came with white bean puree (not sure if this is something I could make or if you need to buy it) and “mint-pea pesto.” Not sure what was included in these and what would be needed to make them. The instructions were easy to understand, but I should have made the hard-boiled eggs  the way I normally would (bring to a boil for 1 minute, then simmer covered for 13 minutes). This suggested it site for 12 minutes, but it wasn’t cooked enough for me.

Shrimp Scampi was also delicious, and I like that they included a salad with the meal. This one I can make on my own again. Shrimp scampi is one of my favorite things to cook normally.

This was a pretty standard recipe; I liked how it flavored the shrimp. It used garlic and lemon. It also had Brussels sprouts. I love Brussels sprouts; the first time I made them was with my Blue Apron box. This was a completely different way to make them, and I like them. It gave the scampi a nice crunch and added a healthy food to the meal. I tried to add some wine in (I feel like this is just one of those recipes that needs it), but I was out of white wine! How is that possible? Lessons to learn…

Finally, the last meal I made was Greek Chicken & Potatoes, and it was my favorite of the three. There is something I like about a side of potatoes. This was the first time I made fingerling potatoes, which

were delicious. I was surprised I liked this recipe because it included canned artichoke hearts. I love steamed or boiled artichokes, but I’m not a big fan of them when they are canned. Too salty or something for me. This dish had a great blend of flavors; the arugula is what brought it all together. I wish I could make this again, but the creamy sun-dried tomato sauce was pre-made. It says it included feta cheese and sun-dried tomatoes, but I’m not sure what I means. A nice step that can by used when cooking in the future is the marinate for the chicken. I let it sit for 2 hours, but it says it could marinate for 5 minutes. It was only lemon juice, olive oil, parsley, cilantro, and marjoram. How easy and good. Then it gets cooked on the pan. If you have this option in Green Chef – I highly recommend it.

I can appreciate organic, but I am not an organic eater and cannot appreciate an increased cost for eating in this manner. This box is about $20/week more expensive than other boxes. I didn’t see a quality different in the produce or protein, so I wouldn’t buy this box again. The food was delicious, but in the competitive world of subscription boxes, this doesn’t have enough compelling features to sway me into the Green Chef camp.