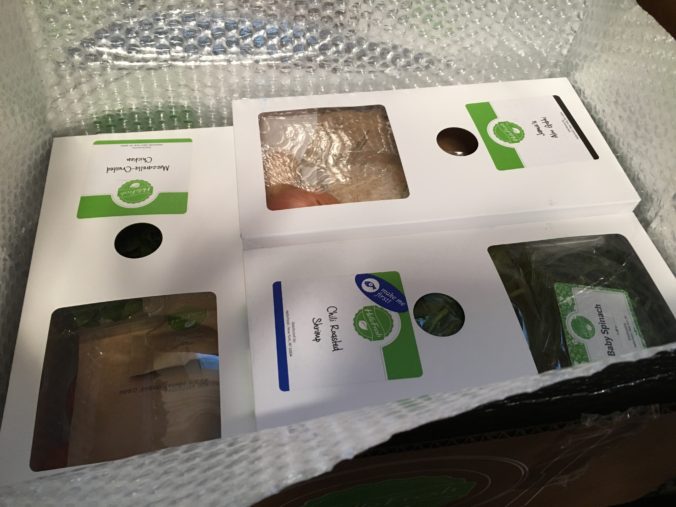 When I moved to Charlotte, I wanted to try all of the food-cooking, delivery services (is there a real name to these)? First up is Hello Fresh. I had a $40 off coupon to use, so the original $69 price tag was reduced to $29, which includes shipping. This costs covers 3 meals for 2 people.

The website is relatively easy to use, but I did find it confusing to learn FAQ section and how to pick the meals I wanted. Since I’m a picky eater, this is important to me. I emailed the team and received a quick response back in how to do this.

I love to get mail, so the delivery was really fun. I received a huge box and in it where there separate meal boxes. It also included a recipe book for all of these meals. Unfortunately, the box was missing the protein items (chicken and shrimp) for two of the meals.

Customer Service (I used email) was very prompt and helpful. I told them I was missing these two items and they put a $23 credit on my account. I felt like it should have been something more since I now had to go to the store to buy shrimp and chicken. I was pleased with how quickly they responded.

Now it was time to cook. I really liked the concept of having all of the ingredients provided to you in their correct quantities. The meals I chose for the week were:

These were interesting because I wouldn’t have chosen to make these if I was looking in a cookbook. Overall, all of the recipes were really delicious. It was fun to cook dinner, and they came out well.

The Aloo Gobhi was supposed to take 45 minutes, but it ended up taking me closer to 1.5 hours. I may not have cooked it on high enough heat. I am also slow when it comes to chopping vegetables and this took quite a lot of chopping.

I usually don’t cook a lot because it makes too much food, but this was only two portions. It made for a great lunch the next day. I was nervous it would be too spicy (I don’t like spicy), but it wasn’t. It was surprisingly delicious.

The Chile-Roasted Shrimp was really delicious, and I will make this again in the future. It was low carb and very easy to make. It is a quick weeknight dinner, but it involved ingredients I wouldn’t normally buy at the grocery store, like cannelloni beans. I need to figure out where I could find this in the store. Having it provided in one box was very helpful.

My favorite recipe was the Mozzarella-Crusted Chicken. True confession, I HATE touching meat and it creeps me out to buy it at the store. This recipe was so easy, and I could make it more often to get protein in my diet. It was such a good dinner and took less than an hour to make.

This was a fun wander. I had a great time cooking the food and it was relatively effortless. The recipes were easy to follow, even though the they took me longer to make than suggested. I won’t be a regular customer though because of the steep price tag, and it was really annoying that the chicken and shrimp were not included. I may have different opinions once I try other programs. The program concept it great.

“Not all those who wander are lost”