Pre- pre-training is over after my 3.5 mile run tomorrow, and I move into pre-training next week. Thinking of things in phases like this is helpful, as it gives me more beginnings and ends.

Pre-training takes me from getting in the habit of running 3 days/week to 4 days/week, which is my goal for marathon training. I am following Hal Higdon’s Novice Base Training Program for 12 weeks. My goals during this phase are:

Don’t let perfect be the enemy of good.

I’m trying not to take off more than I can chew because building my confidence is really important. I don’t see myself as a runner, and sometimes a run can seem overwhelming or daunting. I don’t want to get nervous and miss one. Consistently running 1.5 miles has been a positive influence for me. I know that is a distance I can handle without a problem. As I continue my training program, if I feel I don’t have the time or the energy, I need to get out and do at least the 1.5-mile loop. A little bit is better than nothing. “Don’t let the perfect be the enemy of good!”

Can’t wait to give you my next update in a few weeks!

My running career has been fickle. I was very committed to running two miles almost daily in college. That’s when I was in my best shape, but I fell out of running after college. I was set to get back into it by using the Couch to 5K app in early 2013. A few of my friends were running half or full marathons. Even though I thought they were crazy, but mostly I was impressed. It was great for them to do it, but I didn’t think there was a way that I could do this myself; 13.1 miles is a lot!

In early 2013, I moved to NYC and was exposed to a lot of people running. Many of the girls I worked with did half marathons and cared about their health. Going to Central Park (my favorite place) you can’t help but notice all of the people running. It was a completely different world and very motivating. Since I was trying to get back into running, I started to do a 3 mile loop from my house to the park then around the reservoir before returning home. When you find a route like that, it is comforting to do the same thing every time you go out there.

Then, I got the courage to sign up for an interesting looking 5K – Runyon 5K at Yankee’s Stadium in August 2013. This would be my first 5K and my first race; I was so nervous about it. The night before I went out with friends and didn’t even have a glass of wine! I woke early the next morning and took the subway solo to the Bronx. Before we started, a volunteer or event coordinator gave us the highlights of what to expect – we would be going around the field twice (so cool!), get video taped on the scoreboard, then would make our way up and down multiple flights of stairs and ramps. This would not be a race to PR.

Five and a half years later, I am very proud to say that I have finished 6 half marathons, a full, and a handful of smaller races. It all came full circle on March 17, 2019, when I completed the NYRR United NYC Half Marathon. NYRR is a premier running organization based in NYC and hosts many races in the city throughout the year. All of the runners who impressed me at work and in the park were part of this group, and I wanted to be part of it one day.

It was a tough one because the stairs kick your butt, but ultimately, I was successful! I couldn’t believe I had the courage and stamina to complete my first 5K. I had completed a race in NYC.

In fall 2018, there was a post for the NYC Half on Instagram. I thought it was weird because it is a hard race to get into via the lottery, so why would NYRR advertise for it? On a whim, I asked my friend Ursula if she wanted to try for the lottery with me, and she said yes. Because of the limited number of spaces, I didn’t have much hope of being selected, but we both were!

The event was everything I could have hoped. I didn’t train as well as I wanted, but I had my second fastest time. The city was absolutely beautiful, and even though I was tired at mile 10, the energy of 42nd Street and Broadway energized each step. Finally, when I got into Central Park, I was back to where I use to go on runs five years before. I was running with the motivational runners who inspired me way back then.

When I finally crossed the finish line about 2.5 hours later, I couldn’t stop smiling. It was a beautiful morning because the sun was out (it was cold). I crossed the finish line like I had done 6 times before, but this one was different. This one showed how much I had grown and showed me how much I could accomplish in five years. I now did something those motivational people did. As I continued walking, a volunteer greeted me with my medal. Heck yes! Accomplishment!

It takes me a lot of time to make a decision. This particular decision has been in the works for 2 days short of 8 months. I’ve gone back and forth on it, but this weekend, I committed and it is done. I am going to train for and run the Walt Disney World Full Marathon in January 2018. I had resisted because I didn’t think I would be in good enough shape for a full, but I gave into peer pressure.

Well here’s to my next 6 months of training! It’s not going to be easy, but I’m motivated and ready to run for the Mouse! Who knows, maybe Tinkerbelle will give me a little pixie dust…talk about a happy wandering!

I wouldn’t consider myself a runner, but I do love how it feels after I run. I used to think running a half marathon would be impossible for me, but today I proved myself wrong – I finished running the 2016 Charlotte Half Marathon!

In 2010, I had my first chance to see a half/full marathon. It was my last day in Las Vegas, and my friend and I were drinking on a patio outside of Paris watching the runners. By the time we were on our way out that evening, the marathon was still finishing. My second time watching one was the NYC marathon in 2013 – talk about good runners. Something I liked about watching these events was anyone (who trained) could do it. It’s not like watching a basketball game; we can’t all play basketball. I am lucky to have a lot of friends who run, and their advice and experience persuaded me to try it out. I had gotten out of shape and was looking for something to motivate me – that’s when I signed up for my first half.

Savannah was my pick because it was flat. I was nervous to run it, so I wanted to make sure I didn’t have added obstacles to block me from finishing. When training for this race, I made sure to do all of my long runs, but I didn’t always do my short runs. Long story short, I did a long run in NYC one weekend (one of my dreams was a long run in Central Park) where I pushed myself harder than expected AND then continued to walk around. Turns out, I developed a stress fracture in my foot. I wasn’t supposed to run the half, but I decided to walk it because my brother was running. It was a great experience.

But Charlotte 2016 was my chance. Unfortunately, I didn’t stick to my training plan. I ran short runs, but I just couldn’t get motivated for the long runs. As is the motivation for all procrastinators, the deadline started approaching, and I had to get serious!! Two weeks ago, I did a 10-mile long run and then again last week. I did well to mile 8, then it got tough. 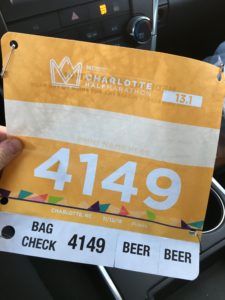 There were no words to describe my nervousness for the actual race. An additional 3 miles is a lot, and I wasn’t sure what to expect. I woke up this morning at 5 am to each breakfast and have a little coffee. Before I run, I have a waffle with peanut butter and cinnamon. I usually put a banana on it, but I forgot to buy some. I walked my dogs and hung out before driving Uptown. Charlotte isn’t as big of a race as Savannah is, but it sure is cool being in your home city. Soon enough, the race started. It’s hard at the beginning –

Soon enough, the race started. It’s hard at the beginning – everyone is excited and full of energy. Since I’m not a strong runner, I have to watch myself because I can’t go too fast. It’s literally a marathon, not a sprint! It’s tough to have people pass you, but I just zone into my podcasts and worry about myself. I did a great job running to mile 8, that’s when things got tough. I had to run/walk the remainder of the race. My legs were like Jello!

As I went up Mint St. and could see the Panther’s stadium, I got excited. I had a pick up in my run. Then – there it was! The finish line! “Keep going, keep going,” I told myself. As I did, I started to increase my stride and sprint! Then VICTORY! I was over the finish line. 13.1 miles were conquered, and I could say I ran a half marathon. My goal was to finish in less than 2:45 – I finished in 2:35. A MAJOR accomplishment for me. 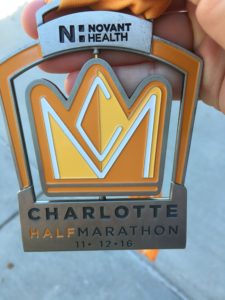 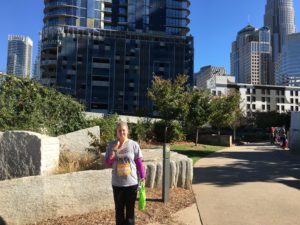 I do enjoy these races. Disney is my next event, which will be fun because I am doing it with a group of friends. And it really isn’t impossible. If you want to run a half, you can! If I can do it, I truly believe anyone can; you just have to want to do it. Halfs are nice because you have to commit to training, but you don’t have to modify all of the details in your life.

I have a lot of respect for full marathoners, but I don’t have a desire to run one. If my finish line was the halfway point, I don’t know if I would have made it. A marathon is also different because you have to watch your diet and long runs are more than a half marathon. It’s a great goal, but I don’t think it’s something I’ll do. More halfs, on the other hand, yes, I will definitely do this! 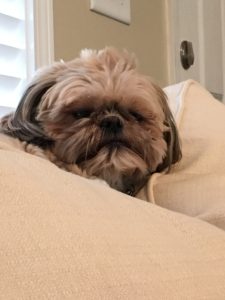 Such a cute face to look at when recovering