“Oh, Luigi.” I’ve been saying this several times a day for the last month. Exactly a month today, actually. I thought he would have found his fur-ever home well before this point. I mean, he’s cute as a button (I call him Buttons sometimes). 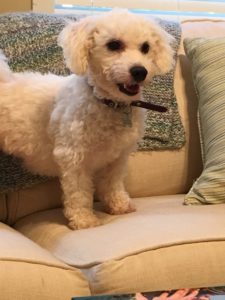 They say Luigi is 2-3 years old, but I really think he is younger. He is all puppy. Everything about him is puppy, and if I had that expectation and more patience, it would be adorable. There is a big difference between a puppy and a mature dog, and through this experience with Luigi, it frustrates me that people don’t know the difference. People, if you plan on adopting a puppy please know they want to play and their energy is boundless! Even the cute ones can be crazy!

When Luigi got to our house, his skin was irritated and he had kennel cough (actually passed it on to Schatzi and Amie). It turns out he had a flea allergy, so we had to doctor him up and get him healthy.

Luigi needs an active home. He loves to be involved in everything in your life. Whether it is going on walks, riding in the car, sitting with you on the couch, I mean, he even swam in the la 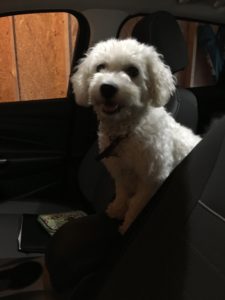 ke to be with me. He didn’t love it, but he didn’t hate it either. The boat on the other hand…he loved the boat. I’ve never had a dog who wants to be a sidekick. It’s the only word I can think of to describe him. Even when he rides in the car, he perches next to you (see picture!) I mean, he is just so darn sweet!

Since he has so much energy, and his previous family didn’t do any training (besides house training), we are working on commands. He is doing well with them. He lays down and stands up now. He’s catching on quickly.

If you or anyone you know is looking for an adorable, sweet-tempered puppy, Luigi is on PetFinder.

But let’s be real, he’s too adorable to not post a bunch of pictures. How can someone not love him?! 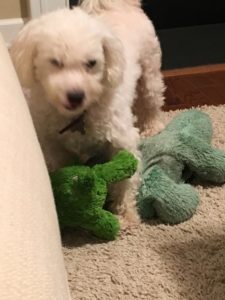 He loves, loves to play with toys. He can’t get enough of them! 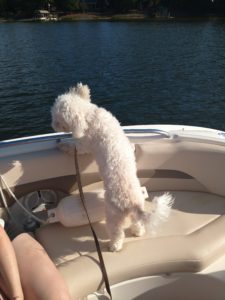 What a boat dog! He loved the wind blowing in his face 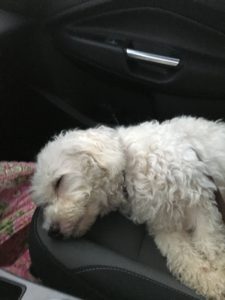 Even puppies need their sleep! It’s tough boating all day. He was too sweet looking…but I woke him up because you should sleep at night. 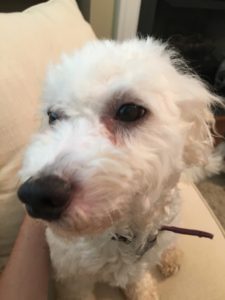 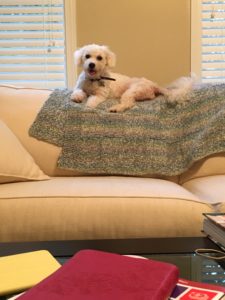 Luigi loves the furniture! This is one of is favorite places to sit…he even taught Schatzi how to sit like this. Oh dear… 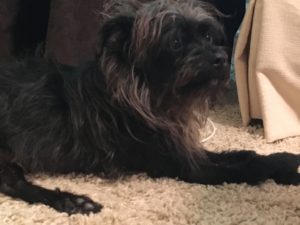 Two weeks ago today, Morrissey joined our family as our second foster pup. Needless to say, this has been more interruptive than snuggle bug Becky (now my sister Shadow). We (I? I think Schatzi mentioned this being a bad idea) should have known it would be more work, but the post requesting his foster tugged at my heartstrings, so here we are. Morrissey is an 8 month old Yorkie mix. This means he is full-fledged puppy, and regardless of how tough his life was, you apparently can’t take away the non-stop energy a puppy has. 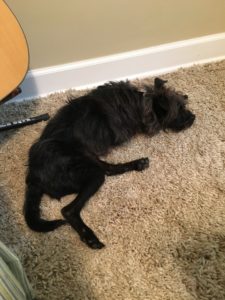 We don’t know his backstory, but you can tell from his appearance he was neglected. Morrissey is a bag of bones. His legs grew in a bowed backwards because of poor nutrition. He is skinny as can be. You could feel his ribs and see his hips on the first day. It was heartbreaking. I just don’t understand how someone can treat an animal this way. Not to mention he has a horrible haircut. I think someone wanted him to look like a lion or something since he has a mane. The first day having a foster dog is really hard. The dog is terrified; he/she just spent a few days at the pound with other dogs. They don’t know where their home is, who you are, where they are going, or what is going to happen to them. Therefore, it is hard to judge their personality at this time. My first day with Morrissey was crazy. My dogs went to my parents house, so we could try to acclimate him to his new life. I slept on the couch for the first week because he wouldn’t stop crying when we went to bed. He has to sleep in his kennel, and he would rather not do this. My main goal was to get him food to beef him up and some sleep, since who wouldn’t be cranky when they are tired and hungry. 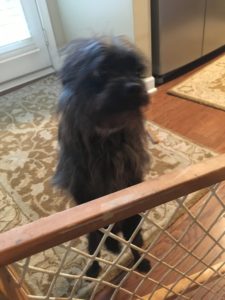 Two weeks into his new life, we have a routine. He still doesn’t like being alone, but he doesn’t cry as long when you leave him or go to bed. I think it’s really funny (somewhat cruel to him), but he stands up and cries when he wants something. Not only does he stand up, but he walks around for a really long time while doing it with his hands straight down. Since he’s so skinny and long, he looks like a crazy old man! I tried to take a picture of it, but he moves around too much. He isn’t the most photogenic pup out there, but it’s so funny. I put him in the kitchen when I’m eating, and he stands up and walks around most of the time I’m eating. We are working on crate training, and I think this will come overtime. He’s much better than the first week, but still has a long way to go. 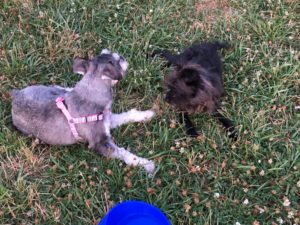 Last night, however, I found Morris’s kryptonite! My neighbor invited me to go to the dog park with her and her dog. Schatzi and Amie would find the dog park hell on earth, but I hoped to wear off some of Morris’s energy, and did it ever! Morris LOVES the grass. He loves to lay in it, roll in it, walk in it, you name it. The dog park is a big field of grass where he can run off his leash. I hadn’t seen him so happy. He wasn’t quite sure what to do, but he followed his new friend around. They chased each other, he talked to big dogs through the gate, and tried to follow a ball (he had no clue what to do!). By the end of the night, he kept trying run, but looked forward to resting when his friend did. We finally took them home. 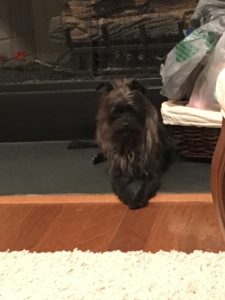 When I got inside, he spent most of the evening crying at the front door. He missed his new friend! He’s such a little Romeo. They will go back soon. He even laid down for a bit – just showing how tired he really was. Who knew life could be so much fun! He’ll be going back to the park again soon, since I think it’s good for him to socialize, learn manners, and run out that puppy energy!

Something I appreciate about Morrissey (and dogs) is how appreciative they are of life even though things were rough beforehand. They don’t dwell on it. They take advantage of each day and moment. They move forward and keep going. A lesson all of us can learn from rescue pups. All they need is love and attention – someone to keep them safe!

If you’re interested in adopting this lively puppy, please visit his profile on Petfinder.com. You will need to complete an application through the Charlotte SPCA. He is looking for a safe home that can provide him a lot of love – and grass if you have a yard!

I realized I couldn’t have a blog and expect you to get to know me if I didn’t introduce my two favorites in the world – Schatz and Amie. 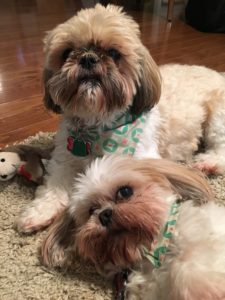 They are both Shih Tzus. Although they have similar coloring, they are not biologically related. I adopted Schatz (the bigger one sitting up) when she was just a baby. She is really funny, being more of a person than a dog. She watches TV and even memorizes commercials. She hates horses or when people are angry or clapping – but she does love to watch drama shows (like The Bachelor and Real Housewives), animal shows, and golf…yeah, she’s weird.

Amie is a sweetheart. We rescued Amie 5 years ago when she was found at the Mason Creek Puppy Mill in NC. Amie was one of the mama dogs (no knowing how many litters she had) and in very bad shape when we adopted her. She weighed 6.5 pounds, her fur was so thin you could see her skin, she had diseases, and she couldn’t walk well. The SPCA told me they thought she could have arthritis or something. Today, she weighs 9 pounds and LOVES to run. Not just run but sprint. I think she didn’t have any muscles built up for walking before, but she really appreciates life. She’s super funny because when she eats, she either takes a few pieces of kibble to the carpet to eat or she sits in front of her bowl. Again, not regular dog behavior, but it makes us smile.

You’ll hear me harp on about how poorly some people treat dogs. When Amie was rescued, she was just one of 300 that we rescued! The man involved didn’t even get punished. Just a slap on the wrist. COMPLETELY not acceptable in my world. At least Amie is happy and well-adjusted now. Dogs are simply the best!