Sorry it has been so long since I last posted! I wasn’t well last week, and this week completely got away from me. I’m excited to conclude my three day jaunt to middle America with you today. 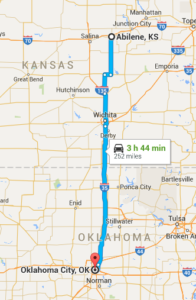 From my start in Kansas City to Omaha and Abilene, I finished my trip in Oklahoma City. I didn’t do much research for this stop at all. Several people that I met on my journeys mentioned that the Oklahoma City Bombing Memorial was one of the best executed memorials, so that was on the agenda, but not much else. My brother drove up from his home in Austin to meet me, so at the least, I would get to see him. I figured it was a big city, there should be something to do. I was pleasantly surprised.

It was a good ride from Abilene to Oklahoma City. The rolling hills of Kansas started to flatten and get dry. Then I saw something weird in the distance, but I couldn’t quite make it out. Then, it hit me. I think that’s an oil pump! 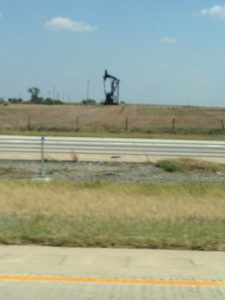 I had never seen one in real life, and it made me excited! There were many of these throughout the rest of my drive into Oklahoma, and I continued to see them on my other trips out West. I didn’t even think to research the rise of oil and oil tycoons. One sign mentioned there were mansions for oil tycoons that you could visit as historical sites. That has done so much to affect their economy and culture, I bet it would have been really cool to see.

Once I got to OKC, I met my brother at our hotel downtown and we went to the state capitol. I love to visit state capitols when I have a chance. To think that is the center of the state’s government and all of the things that happen there. Funny enough, I still haven’t been to the North Carolina capitol, and I lived in Raleigh for almost 6 years. The curse of not visiting your hometown…this will change in the future. Oklahoma’s capitol was very impressive. Since it was a weekend, we weren’t able to go inside or take a tour, but we did get a good luck of the outside of the building. We had an absolutely PERFECT fall day. There were Carolina blue skies way out there in OK! 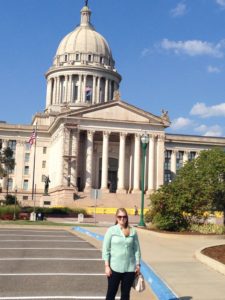 After visiting the capitol, we decided to explore the city. There was an Ohio State football game on, so my brother found a local OSU bar so we could watch. Following that, we walked around and “discovered” this fantastic riverwalk area of the city. I believe it was relatively new, but it was a great find! The area around it is called Bricktown. I can’t believe that wasn’t one of the first areas mentioned in sites where I researched. Since I have visited, I see it more, but for whatever reason it wasn’t readily apparent to me. Basically, a small, man-made river (creek?) was created through the city, and it was lined with bars and restaurants. It doesn’t go anywhere; it just is in the city. I believe they fill it up manually when it gets low. 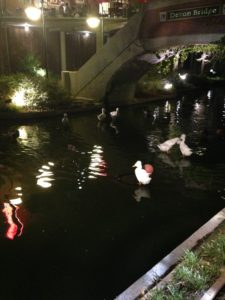 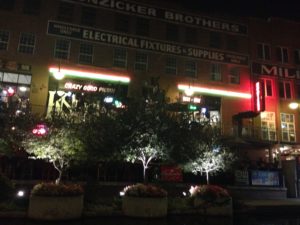 OKC has done a lot of revitalization efforts over the past few decades. One of my favorite podcasts is Travel with Rick Steves, and I heard an interview about OKC many months ago. I think it’s wonderful to see these improvements! They have done an amazing job making OKC what it is, and it now rivals Tulsa in offerings and coolness. After dinner and drinks, we went to bed.

The next morning we each needed to leave early to get home, but we took a morning walk to the other side of the city where the memorial is. OKC is very walkable. The city has a hip and shiny part of the city and an older part with sandstone colored exteriors. The Oklahoma City Bombing Memorial was as well done as people say it is. The memorial was created to remember the 168 people who were killed in 1995. I remember this happening as a kid. We planted a dogwood tree in our backyard, which President Clinton suggested families do as a memorial. The whole scene was still, somber, and peaceful. I think the pictures tell the rest, but I would highly recommend a visit. 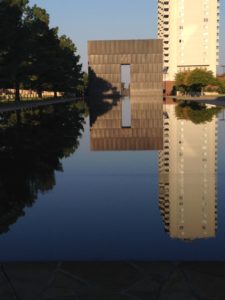 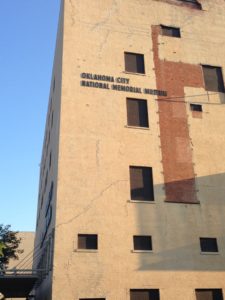 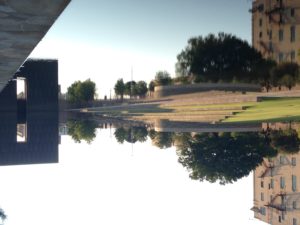 Oklahoma City isn’t somewhere most people think about visiting, but I think it should be. I believe there is a lot more to explore in the city and the surrounding area. Whether it is native Americans, ranching, or oil, that area has a rich history that we are not usually exposed to if you’re from either coast.

Overall, Nebraska, Kansas, and Oklahoma may not be as sexy as dog sledding in Alaska, partying on South Beach, or eating lobster in Maine, but it was a huge treat and provided more appreciation for this great country. Flyover states have their own unique charms and are home to millions of Americans. Even though it was hard to recruit someone to meet me, I suggest you have an open mind if you’re present with an opportunity to visit. Happy wanderings!